“Un Cuba Libre por favor”— you would think I’m chanting the motto of a revolution, but simply I am ordering a drink, and a great one at that.  However, a lot of people based out of the States may better know it as a “Rum and Coke”.
The “Cuba Libre” is a cocktail beloved by the Cubans, with its roots sprouting from Cuba (as spoiled by the name).  The cocktail asks for a simple combination of 3 things: a Coca Cola (or coke if you prefer), ½ a lime (either as a garnish or freshly squeezed into your drink), and rum of course.  As you’re speaking to a Cuban, I obviously recommend my favorite of all rums, also beloved by my culture, Bacardí. 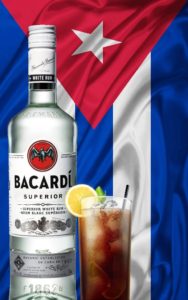 Well did you know that the “Cuba Libre” (alias Rum and Coke) that you’re drinking has roots dating back to the mid-19thcentury?  Pretty cool, huh?  You’re indirectly sipping on some history right there!  Well when I began, I mentioned that ordering a “Cuba Libre” closely resembles a revolutionary chant—and I wasn’t completely wrong in saying that.  The name “Cuba Libre” began being used throughout the Ten Years War (1868-1878).  During this time, the Cubans took on the phrase “Por Cuba Libre” as their motto while fighting for independence from Spain.  This motto translates to “a free Cuba”.  However, at this point in time, the drink wasn’t particularly as appealing as it is today, as it was comprised of molasses, honey, and water, and something by the name of “aguardiente”, which is reported to have been a blanket name for all hard alcohol.
The “Cuba Libre” began using its signature Coca Cola it still uses today just 2 decades later throughout the Spanish-American War.  As the U.S. supported Cuba’s initiative for independence, American soldiers and businesses alike entered into Cuba.  One of the most prominent businesses to enter Cuba at the time was Coca-Cola in 1902.  American involvement in Cuba throughout the Spanish-American War, as well as Coca-Cola’s entry into the Cuban market helped to spread popularity of the “Cuba Libre” beyond Cuba’s borders.

So the next time you’re ordering a rum and coke, simply ask for that lime garnish and you’ve got yourself a “Cuba Libre” and some history, no textbook necessary.
http://imbibemagazine.com/history-lesson-cuba-libre-cocktail/
http://www.newsmax.com/FastFeatures/Cuba-libre-cocktail/2015/07/15/id/657242/
Posted in Uncategorized